Also known as: "Singing Lady", "Karaoke Girl", "Hologram woman" and "'Plot' physics" in the community; Aria is one of Chamber Bosses of Mistsong Summit, also known as Mistsong

"When I Say Jump"[edit | edit source]

"I Am Rubber and You're glue"[edit | edit source] 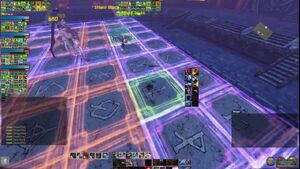 "Love is a Open Door" skill activated, the green tiles are safe to stand, anywhere else is not

How minions are introduced[edit | edit source]

There is 2 ways that minions can be generated:

The generation of minions by the stairs have some special mechanic: