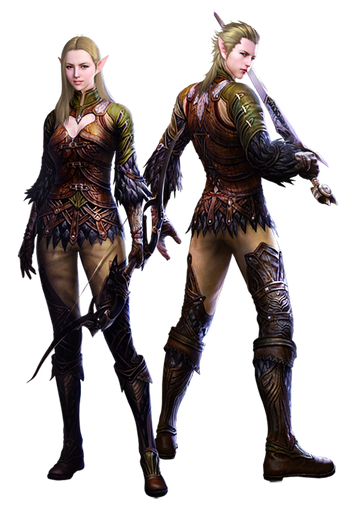 Elves look very humanoid, similar to Nuians but more elegant , beautiful and harsh at the same time. Preferring more natural architecture the Elves are often found secluded deep within forests, avoiding other races as much as possible.
Though envied for their beauty, their behavior is considered incomprehensible: hoping for an honorable death, they seek out danger no matter the odds.

Spending decades near Gweonid Lake has made the Elves adept swimmers.

The elves first mount will be an Elk. There are 3 different types of Elks that the Elves can get. 1. Violet Elk 2. Green Elk 3. White Elk

While the ancient continent dislocated itself, the Elves took the road, heavy hearted, sounding dirges. Guided by the goddess of the Hereafter, Nuia, they traced their own route through the gates of the Hereafter, to the new world. However, none of them used violence during the Great Migration, unlike what each one of them expected. The whole royal court disappeared in the depths of the world, during the trip through the doors. The memory of their king, Aranzeb, his life, transformed itself into crystals which scattered themselves in the underworld. Thus, when they arrived in the other world, the particles became sad memories for their whole race; the remembrance of their sovereign. After the Great Migration, the Elves promptly left the alliance and submerged themselves into dense forests to settle there. Since then, people found them both mysterious and terrifying. The Elves were conscious about it and were not afraid to let run harmful blasts on their forest. Regularly, some of them would become crazy, thus always frightening the other races in some parts of their society. From the East to the West, people would fight every day to recover strength and power, and to create a new history. However, all of this served little interest to these hermits. They did not like the vanity of the humans and only focused on restoring their own civilization. Although these last major world events stayed in their memory, the Elves did not uniquely live in the past, dreaming to persist in the ashes of history. [1]