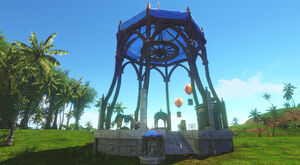 A Fellowship Plaza on display on Mirage Island

A Fellowship Plaza is designed to serve as a crafting hub for a housing province, offering several services to the public including a general vender, which acts as a general merchant, a mail owl, a well, an auction house, warehouse access, and a fireplace. There is also a Fellowship Workbench, which allows for specialty crafting depending on which zone the plaza is built in, or acts as a regal cooking station if no applicable specialties exist for that region.

Unlike other buildings, the Fellowship Plaza's tax rate does not increase depending on the number of properties a player owns or even the local tax rate of the province the plaza is built in. This is likely because the plaza acts as a sort of public service, since they are always set to public access and provide many useful services, even before the addition of any extra services a plaza's owner might add, such as regal crafting stations.