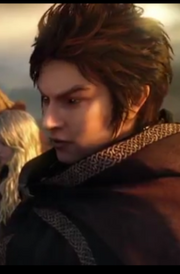 Gene Evernight, a human prince of the Iferii (from the original empire on the continent of Auroria before the downfall of this continent many years ago) was the first male born to the King of Epherium. His mother was a dancer who the king had taken as a mistress. His name at birth was Padmos. He ran away at the age of 14. One source claims to escape the duties of court and his position, another source claims he ran away because his mother killed his half-brother in jealousy over the full-blooded prince's inheritance of the kingdom. Gene became the disciple of the gladiator Gina and after Gina's death vowed to bring glory to his teachers name.

Gene was lover of Kyprosa Daeior and close friends with Aranzeb and Tahyang Kahlzit. With the latter he lead the Shadowhawks in Delphinad. He was part of The Expedition and accepted one of Thiol's twelve soul fragments - after which he became Kyrios, the god of destruction. More can be gleaned about him in Orchidna's journal entry dedicated to Gene.

The skillset of Battlerage is attributed to Kyrios. 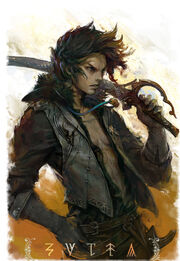 Gene/Kyrios was tricked by his evil (undead?) advisor Anthalon into believing that Kyprosa Daeior tried to plot an assassination to kill him. He became delusional and at some point so paranoid that he killed Tahyang (now God of the Wind) and Melisara Livolla and assimilated their soul fragments and power. Aranzeb challenged him finally but was killed as well. Inoch (now the God of Sealed Doors and Death) and Eanna Nimush (now carrier of the soul fragment of Nuil, Goddess of hell) managed to separate Gene from Kyrios' soul fragments and send his own mortal soul into hell. This caused a devastation upon the continent of Auroria which killed nearly everyone, let the continent crumble and the remaining survivors only managed to escape (the big exodus to Nuia and Haranya) because Nui sacrificed herself while creating a giant portal for the now exiles through the Hereafter - while she stayed in the Hereafter to seal Kyrios soul fragment in.