From ArcheAge Wiki
Jump to: navigation, search
This article is a stub. You can help ArcheAge Wiki by expanding it.

Greater Howling Abyss is a dungeon, designed for level 50 players. It is located in Hellswamp, Nuia, alongside Howling Abyss.

Tank and spank boss. Kite it if you do not have a tank in your party. Torch or simply DPS the eggs that spawn. Remember to move away from the ice patches when it appears under you.

You have 2 options here. One of your members should use protective wings and everyone gets inside the circle, or run to the adds and take their ice buff before the boss hits you with his massive flame attack. The boss may do another flame attack if your group has low DPS. Carry on doing Max damage whilst CC'ing and kiting the adds.

Hardest boss in the dungeon. Position your teammates so that they are either standing on the ledge , torch or in the water. If you are not a ranged DPS, you should in the water. These are geysers that will lift you up when the room gets flooded.

Get your tank to aggro him as he runs to the torch. This allows for everyone to avoid the aoe on the ground. The boss will start to flood the room and do massive damage, so you can use Protective Wings (Auramancy) soon after the flood. Archers can use the skill "float" to avoid the ground attacks.

Easiest boss in the dungeon. Get the tank to take aggro and pull him into the corner as everyone else DPS or heal. You can also pull him out of this room and into the other to kite him. Then the tank just needs to kite him in big circles around the room while the DPS finish him. There is also a weapon that is to be fired on the boss when he gets the orange buff. However, it may be bugged. 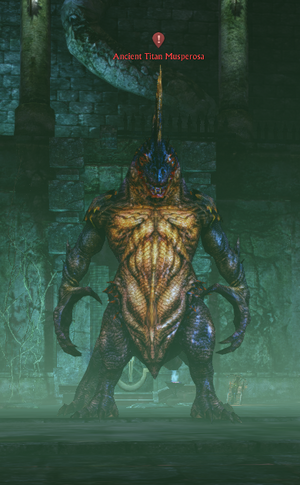 This is the final boss but he is very simple Let the tank build aggro then unleash maximum DPS on the boss. Avoid the glowing balls. If he pulls you, simply jump back and continue DPSing. Whenever he casts "musperosa's witness", run to a corner, grab a shield and press R to reflect his gaze. If you do not do this, you will be turned to stone for a few seconds. If you manage to reflect the gaze successfully, the boss will turn into stone. You can also run near a teammate who has a shield. Rinse and repeat.