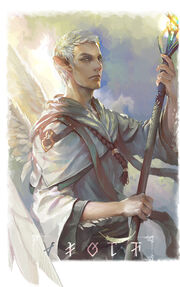 Inoch was a Hiram priest. The Hiram were a race of humans (not Elves, contrary to the appearance of Inoch's ears) who lived in the North of Auroria. Their lifespans were about 200 years, and they are also thought to have been the first race to become the Returned.

At a young age, Inoch was blessed (or cursed) to become an Astral, sprouting wings. Thought to be an ill omen, his people nearly killed him, but he and his cousin fled Hiramakand. When he took a sword to one of his wings, his cousin rushed him back for healing, and the Hiram decided not to kill him. His wing grew back, and he was taken from Hiramakand to Delphinad by other Astrals. There he became a priest of the Pantheon before he was accused of heresy and joined the expedition. How this came to be can be found in the journal entry of Orchidna dedicated to Inoch.

He accepted a soul fragment from Thiol in the birthplace of magic. With the fragment Inoch claimed the power of the God of Seals and Doors, Haje.