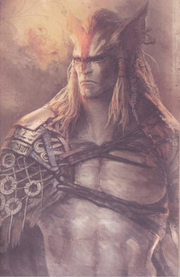 A Firran, oldest son of the Firran chief of the Black Lion and member of The Expedition. Tahyang became the Great Mahra of his people before the exodus to Haranya. He was killed by his best friend Gene Evernight and remains an important part of the Firran lore as well as the history of Erenor.

Tahyang lives on as the God of Wind. The skillset of Archery is attributed to him.